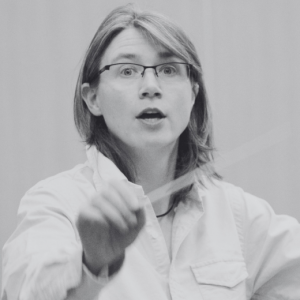 Marion Wood studied a Joint Honours degree in Music and Electronics at the University of Keele in the UK, where composing and recording were an important part of her studies, and she also began conducting. She gained a thorough grounding in both acoustics and psycho-acoustics – how the ear and brain make sense of sound.

She went on to study orchestral Conducting at the Royal College of Music in London. With a focus on interpretation and professional development of young players, she is interested in how music affects audiences, and how groups of people can most effectively learn to play or sing together. These ideas were in focus as the assistant conductor and orchester manager of the National Youth Orchestra of Ireland (2000-2005) and as Director of Music at the University of Exeter (2006 – 2013) where she designed a unique Scholarship program from scratch, encouraging young musicians of every genre.

In 2012 Marion undertook a Masters in Psychology Research Methods and designed a research project to explore issues of sight-reading and notation.

Since October 2014 Marion has been teaching Music Psychology at the Musikhochschule in Münster, Germany, and has also taught conducting and sight-singing. She currently directs the 3 main choirs of the University, and the KonzertChor of Münster.

Since 2013 Marion has also been designing mobile and iPad apps for various aspects of music reading. The free Woodchuck Rhythm app for kids recently reached 180,000 downloads, and Play-my-Note, an app for singers who don’t read music, 90,000.